A computer room air conditioning (CRAC) unit is a device that monitors and maintains the temperature, air distribution and humidity in a computer room or data center.

Down flow cooling systems are the most common design of data centre cooling systems, and are named as such due to the way the CRAC units handle the air, with hot exhaust air entering through the top, passing over the internal cooling systems within, before being ejected out of the bottom of the unit. CRAC units, or computer room air conditioning units, are configured as either Down Flow Plenum or Down Flow Front Displacement.

The overall design of your data centre cooling systems should be sized to the I.T. load, with the ability to expand without disruption to critical services which avoids energy wastage due to system losses. It is vital to build redundancy into your data centre cooling systems, as CRAC units require frequent servicing every 3 months as a minimum. Redundant systems provide additional resilience and facilitate repairs during maintenance checks.

It's paramount that down flow CRAC units are efficient and have a high sensible heat ratio (SHR), EC rated fans and electronic expansion values. Selecting the right cooling system will also have a significant effect on the PUE or DCiE.

CRAC units positioned around the perimeter of the data centre provide cooling down into and through a raised access flooring system. The colder air then flows through floor grilles situated at the front of hardware cabinets. The hot exhaust air is then return back into the top of the CRAC units.

These can be set up using either:

Using external condensers with copper pipe work, DX systems are considered the least efficient but offer the best resilience as every CRAC unit has its own pipe work and condenser. These data centre cooling solutions are most effective in smaller data centres and server rooms.

Using external dry air coolers with steel pipework, they are a very efficient but a more costly cooling solution than DX. They are however, ideal for Hybrid DX or Chilled Water CRAC units combined with chillers. Their deployment is generally more suited to medium and large sized data centres.

IN ROOM, IN ROW AND IN RACK DATA CENTRE COOLING EXPLAINED

HIGH DENSITY IT EQUIPMENT HAS BROUGHT ABOUT MANY CHANGES TO WHAT COULD BE CONSIDERED THE MORE TRADITIONAL METHOD FOR COOLING DATA CENTRES AND SERVER ROOMS. HISTORICALLY A PERIMETER OR IN ROOM COOLING SYSTEM WAS PREFERRED FOR MOST MEDIUM TO LARGE DATA CENTRE ENVIRONMENTS.

Perimeter or In Room cooling designs use Computer Room Air Conditioners (CRAC) which are usually positioned around the perimeter of the room and use the raised floor void to deliver cold air around the data centre. The cold air is pushed around the room by the CRAC units under the floor and released or delivered through perforated floor tiles strategically located in the cold aisle.

This method does present some challenges, one of which is capacity. Perimeter In Room Data Centre Cooling was originally designed for IT loads of 2-5kw per rack, but with the latest high density IT equipment pushing power densities up as high as 20kw per server rack, Perimeter In Room Cooling usually cannot meet this demand.

There are other physical infrastructure issues such as ceiling height, room shape, rack layout and obstructions such as cabling above and under the floor which can obstruct air flow and make it difficult to predict performance. As power density increases and the data centre configuration changes it is possible that much of the cooling capacity may be wasted if the cool air is obstructed and never reaches an IT load that needs it. All of these factors prevent the highest levels of efficiency being achieved and in larger data centres that could result in thousands of pounds in excess utility costs every year.

In recent years there have been a number of developments in data centre cooling technology that help deliver cold air exactly where it is needed in the most efficient way possible. The idea is quite simple. By putting the cold air as close as possible to the equipment that demands it you can reduce the wasted capacity and the energy needed to deliver it.

In addition, because there are usually no obstructions in the row airflows are much more predictable and all of the rated cooling capacity of the CRAC can be directed at IT loads.

The shorter airflow path also reduces the amount of power required to run the CRAC fans, increasing efficiency and lowering utility costs. Most In Row units will automatically vary the fan speed according to what cooling the IT load actually needs at that time, rather than run at full capacity even when the load does not demand it. Additional CRAC units can usually be added with ease to increase capacity or add redundancy as the data centre or server room expands and changes.

With In Rack Data Centre Cooling airflow paths are even shorter and more exact than In Row Cooling systems, and because the CRAC is located in the rack they are unaffected by infrastructure obstructions or room constraints. This means that all of the rated capacity of the CRAC can be utilised, enabling the highest power density to be achieved.

Much like In Row Data Centre Cooling architecture, In Rack Data Centre Cooling has the same benefits in terms of increased efficiency and highly targeted cooling and redundancy.  The downside of this method is that it requires a large number of air conditioning devices and associated piping compared to the other architectures, particularly at lower power density so capital expenditure (capex) costs can be high.

Precise delivery of cooling capacity and the highest levels of efficiency make In Row and In Rack Data Centre Cooling the most popular architectures for modern data centre and server room design.

Edge computing does not require a special type of data center; there is no typical edge data center. In many cases, a very small data center is sufficient – one or just a few racks with a connected load of just a few kVA. A micro data center, in which all infrastructure systems required for IT operations are integrated.

SmartCabinet is the recent iteration of such a micro data center – the complete infrastructure of a data center together in one cabinet. It includes an uninterruptible power supply, power distribution, cooling, monitoring, and infrastructure management – consistently integrated, optimized, and developed from tried-and-tested components. The IT components can be started up after it has been set up, the cooling system has been installed, and the building power supply has been connected. SmartCabinet saves you planning and building effort and simplifies the operation of complex network and server rooms made up of individual components. This saves a considerable amount of the time it takes to start up compared with conventional methods of construction. SmartCabinet is preconfigured, largely preinstalled in the factory, and tested. This ensures that the entire system, along with its coordinated components, is ready for operation from the get go. . 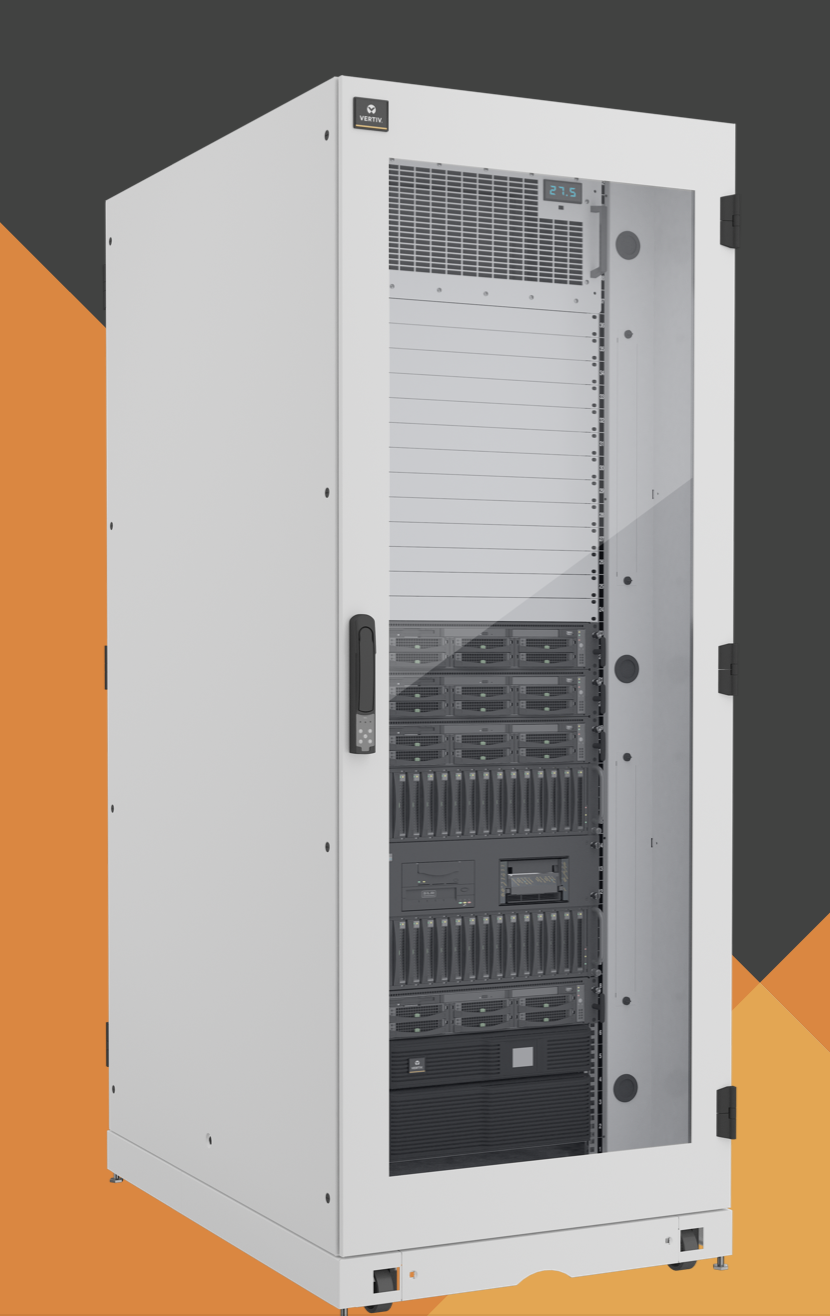 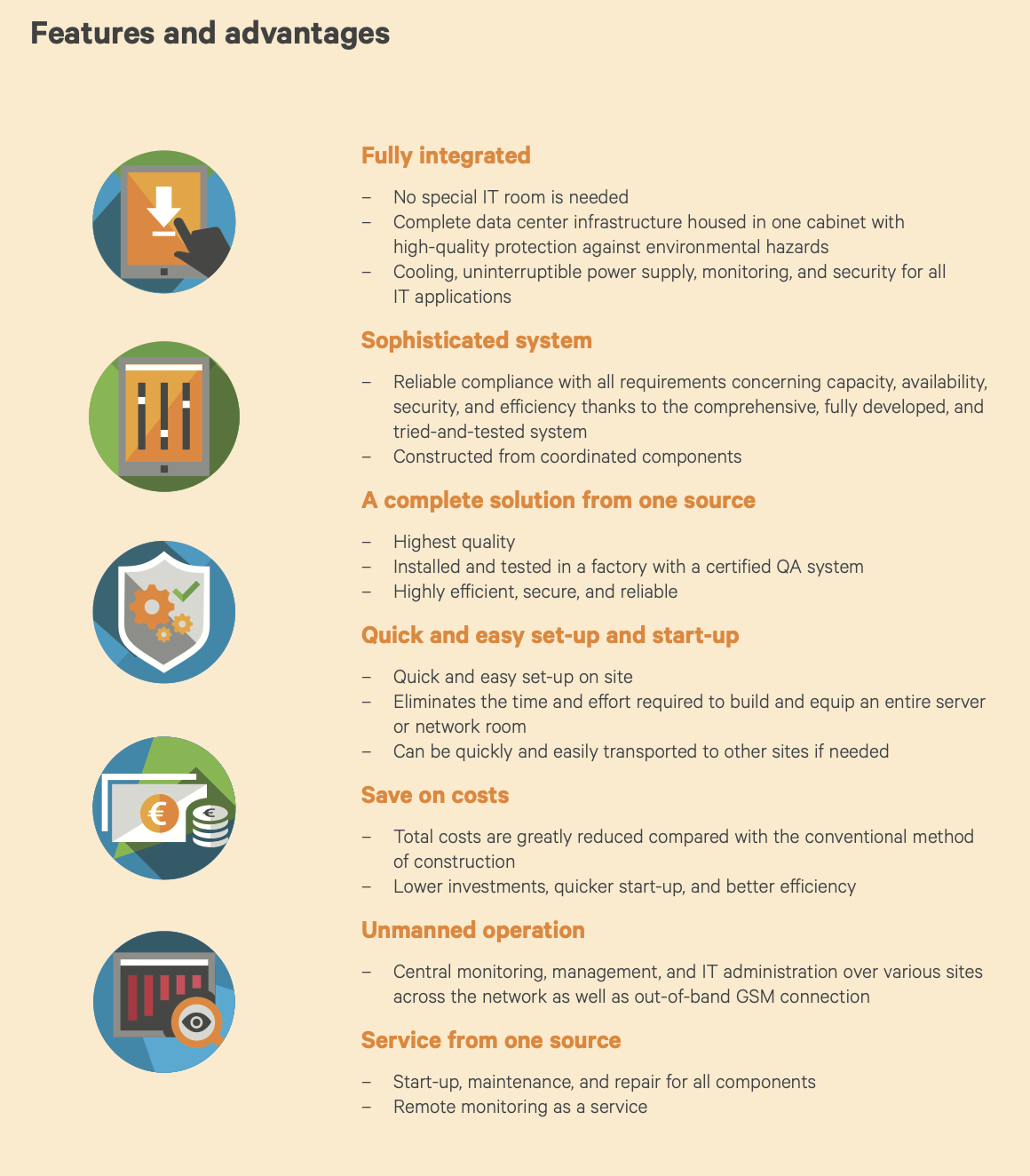